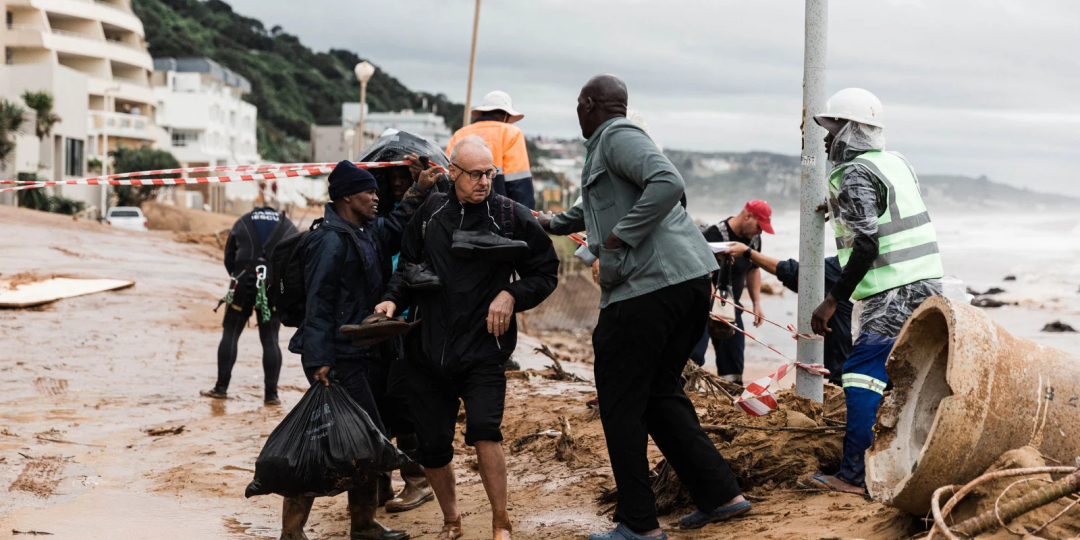 A widely-shared image of a group of Durban citizens at one of the affected beaches.
Comments | 0

While a comprehensive report on the extent of the damage from this past weekend’s flood in Kwa-Zulu Natal (KZN) has yet to be released, a provincial government official said a ‘worrying picture’ was emerging.

The KZN coast was battered by further storms and flooding over the weekend, leading to a Level 10 red warning from the South African weather bureau. This is the highest possible weather warning, issued along expectation of at least 200mm of rain still expected in the province.

A mudslide is the latest effect of the extensive rain at Umdloti’s North Beach Road, with motorists advised to be cautious in the area.

The north of Durban – including the communities of La Mercy, Umdloti and Seatides – were the worst hit in the weekend’s rains.

Low-lying areas in the south of the city, including Isipingo, experienced damage to infrastructure, with roads washed away in parts of Pinetown. The worst hit areas are along the coastal and north-eastern parts of KZN.

La Mercy, north of Durban, has effectively been cut off for now after the collapse of parts of the road linking the area to the N2. Access from the south was cut off in last month’s floods and has still not been restored, according to the Mail & Guardian.

Addressing a media briefing on Sunday (May 22), Cooperative Governance and Traditional Affairs MEC Sipho Hlomuka said that there was still no comprehensive report on the impact of the latest rains, but that a “worrying” picture was emerging.

A statement from the KZN Government shows that relief efforts are ongoing to ensure all community halls with displaced people are receiving adequate assistance, social support services and medical assistance.

“We are thankful that in these areas, no one was reported to have died,” KZN Premier Sihle Zikalala informed media this morning (May 23).

“We have seen the damage is huge. The M4 was already closed due to the previous floods in April affecting the bridge, but the road has also been severely damaged. It is impossible to use that road for a while.”

Tourism KZN and Durban Tourism were approached, but have not responded to Tourism Update’s request for further details at this time.

Several Durban beaches are facing also extended closures because of high sewage pollution levels and chemical and oil pollution from a variety of sources, including a ‘sludge overflow’ from the Sapref oil refinery during the April floods.

Across the city, several municipal sewage treatment works, pump stations and effluent pipelines have been damaged. The city has thus issued a strong warning to swimmers to stay out of the water until sewage bacteria levels drop, the Daily Maverick reports.

“All water activities are prohibited. Beachgoers are urged to heed this warning unwaveringly, because disregarding it could result in outbreaks of waterborne diseases, that may be fatal,” the city said in a public statement.