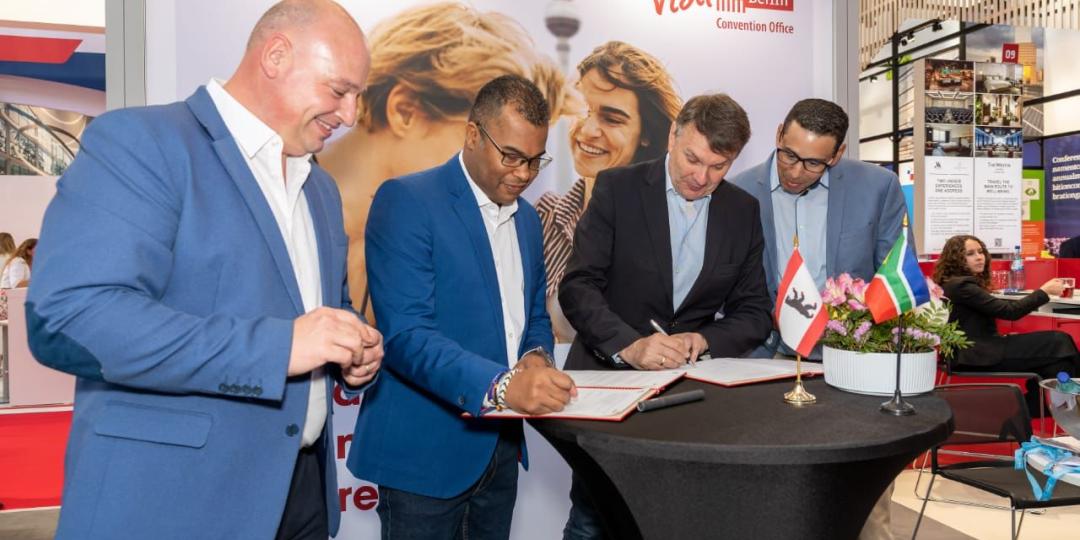 The City of Cape Town has signed a partnership agreement with Visit Berlin, the destination marketing organisation for the German capital. The partnership will see the two organisations market their respective cities to their audiences, a marketing “twinning” concept driven by mutual benefits.

This forms part of a mission to attract more travel and trade to the Mother City by Mayoral Committee Member for Economic Growth, James Vos, and Cape Town Tourism (CTT) CEO, Enver Duminy, who are meeting with global travel trade, travel media and government officials from several major European organisations this week.

“Cape Town’s visitor economy is a pillar of the city’s wider economic landscape. Prior to COVID, the sector contributed between 2% and 3.5% annually to the local economy and sustained up to 5% of all jobs in the city, not to mention those working in affiliated industries. We must do all we can to drive tourism to the city,” said Vos.

The mission team will showcase the CTT Find Your Freedom campaign, a first-of-its-kind, immersive game-style platform that allows users to choose their own experiences in the Mother City. The initiative includes a German-language option.

The interactive interface uses game-style graphics to let global travellers choose their adventure, based on the guide they identify with – the Fearless Foodie, Nature Warrior, or Urban Adventurer.

Prior to the pandemic, German nationals were the second-largest group of international arrivals to Cape Town. Germany was also the first international market to open its borders for travel to and from South Africa without a quarantine restriction in August 2021.

“Germany has long been a key source market for Cape Town, with the city enjoying a lively German-speaking community. CTT has secured this agreement because it gives the Mother City a competitive advantage in driving greater volumes and value in terms of international travellers,” said Vos.

A welcome space for global travellers

“The Cape Town Tourism-Visit Berlin partnership demonstrates the mutual respect Cape Town and Berlin have for each other as world-class destinations, both offering exciting travel opportunities to the global adventurer. Cape Town welcomes the chance to extend our reach to a wider audience and we’re certain our locals will reciprocate and explore the attractions and experiences Berlin has to offer,” said Duminy.

He said international visitors had shown that their appetite for travel was alive and well. “We are ready to shine the spotlight on our unparalleled hospitality to visitors from Berlin, and from around the world.”