Forward-thinking luxury bush lodge owners across Africa have embraced this concept by engineering bespoke solutions for power generation, electrical reticulation and water heating. Besides doing the right thing for the environment by going green, there are substantial financial benefits to be gained by harnessing the renewable resources available to provide energy to the lodges.

With China, the US and India leading the surge in renewable energy production, the IEA predicts renewable energy capacity will expand by 43% – or more than 920 gigawatts – by 2022. Solar is expected to continue to dominate the renewables market, generating far more electricity in the next four years than wind and hydropower.

Erik Solheim, Executive Director of the United Nations Environment, in his report for The European Sting last year, says: “For eight consecutive years, global investment in renewables has exceeded $200 billion, with a massive fall in renewables costs — particularly the tumbling price of solar panels – bringing increased bang for the buck. Its share of the grid has doubled in a decade.” 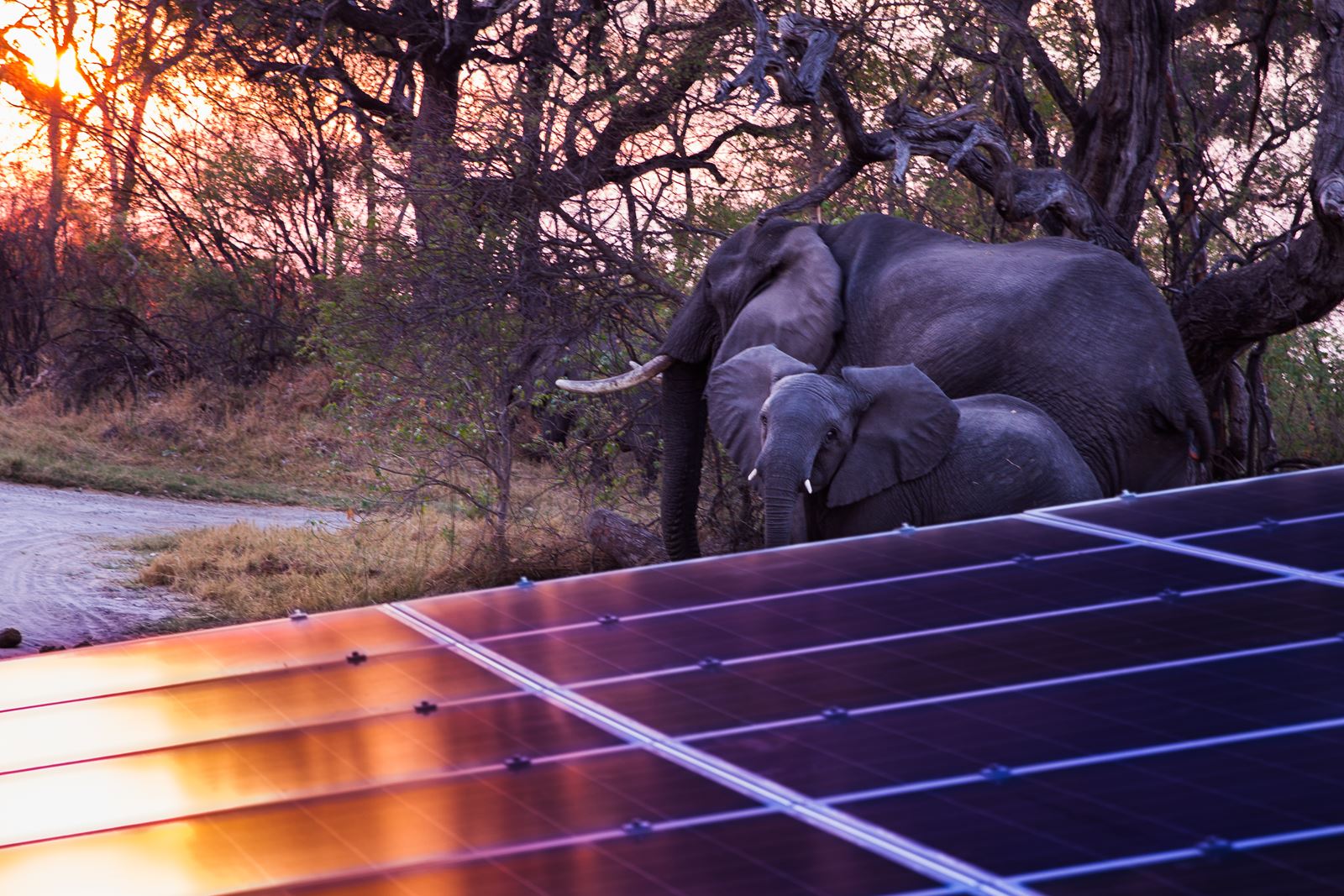 Off-grid sites typically run generators 24/7. In the minds of the people on the ground, if you have a generator you have an ‘infinite’ amount of power (running 24/7); but with solar there’s a finite amount of energy that’s going to come out of the sky every day (amount of time the sun shines), and it’s capital intensive. Andy Heathcote Marks, director of Cape Town-based 1Energy, specialists in remote, off-grid solar installations, explains that the key is to learn how to be energy efficient without compromising the guest experience. “It’s about the type of equipment engaged in running the facility. Most of the power is used not in the guest rooms but in the back of the camp – water-treatment systems, laundries, water-heating equipment and so on. The trick is to use as much solar power as you can during the day and subtly reduce the amount of power used at night,” he says.

Sanctuary Retreats’ Chiefs Camp, on Chief’s Island in the Moremi Game Reserve in the Okavango Delta, Botswana, is one example where solar has been used to help minimise the impact of the camp on the local environment. They went as far as building their own solar farm, which combines solar panels with battery banks to provide effective solar power for the camp. This allows the camp to use direct energy from the sun during the day and store energy for use at night.

Energy-efficient solutions are being implemented at Sanctuary Olonana in Kenya, which is currently being rebuilt.

“A typical solar design, as long as capital allows for it, aims to produce 90% of power from solar. If a camp was burning 1 000 litres of diesel per day with a generator, that consumption will drop to 100 litres,” says Heathcote Marks. “And the environmental impact of transporting that diesel through sensitive ecological areas such as the Okavango Delta will be reduced, along with the noise pollution created by the generator itself.”

The solar panels are erected out of sight of guests. They are housed in specially developed mounting systems to avoid the use of concrete, normally on the ground which can be sandy, rocky and uneven, sometimes in swamps. The heart of the automated system is a very complex architecture of batteries, charging and control equipment all working together with a generator. It is in fact a power station built into something like a repurposed shipping container.

The needless pause into the brave new world of travel

Virtual versus hybrid – where to from here?

How hospitality is adapting to a contactless world

10 things guesthouses need to insure against

The future of post-COVID-19 gatherings