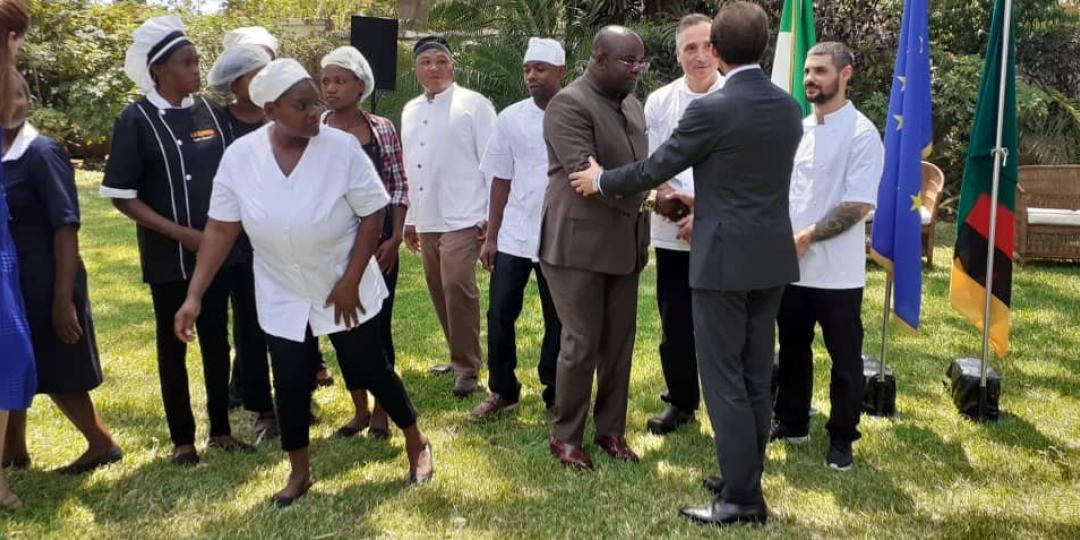 Minister of Tourism and Arts, Ronald Chitotela, and the Italian Ambassador to Zambia, Antonino Maggiore, are pictured with some of the local Zambian chefs undergoing training.
Comments | 0

The Zambian government has prioritised tourism as the second most important economic sector in the country toward the achievement of Zambia’s national Vision 2030, which aims to transform the country into a prosperous middle-income nation in just over a decade.

To that end, Zambia’s Minister of Tourism and  Arts, Ronald Chitotela, has announced a number of strategic measures to grow inbound tourism in the southern African country

According to the most recent statistics released by the World Travel and Tourism Council (WTTC), in 2018 international visitors alone spent around R8.4 billion (€513 million) of the just over R19bn (€1.16bn) spent on travel and tourism overall.

The number of international visitors to Zambia stood at just under one million last year and the WTTC report expects around 1.1 million tourists to have visited by the end of this year.

Yet, despite its inbound tourism appeal, Zambia still struggles to raise significant revenue from the industry to contribute to the country’s GDP according to an Editor’s Comment in the state-owned Zambia Daily Mail.

A recent World Bank report, looking at what it would take to boost Zambia’s tourism sector, highlighted that Zambia faced increased competition from its Southern African Development Community neighbours such as Zimbabwe, South Africa, Kenya, Tanzania and even the Seychelles and was falling woefully behind their performance in terms of generating tourism revenue.

“As a growing sector that we aim to make as a number-one earner of our economy, we must endeavour to put in place everything that can attract both local and international tourists,” said Chitotela, pointing out there was significant scope for Zambia to increase its market share in tourism from Europe and it needed to do more to grow tourism from the continent and move beyond the point where Zambia was seen only as an add-on to tours to South Africa.

The main European source markets are the UK (44%), followed by Germany (9%), The Netherlands and France (both 5%).

The country’s ambitious 20-year Zambia Tourism Master Plan (2018 to 2038) states that international visitors, including Europeans, are drawn to its natural resources, including its unspoiled and varied landscape.

In addition to the iconic Victoria Falls, Zambia has a wealth of rivers, lakes and waterfalls, as well as rich and unique flora and fauna, reads the plan.

“These elements, combined with the country’s interesting cultural traditions, make Zambia a strong adventure, safari destination and eco-tourism destination,” added Chitotela, commenting that Zambia was considered to be a safe and stable country with hospitable people.

Chitotela is working closely with international ambassadors to Zambia to stimulate interest in the country as a major tourism and investment destination, the latest of which is the joint programme between the Italian Embassy and the Zambian government to train 20 Zambian chefs to cook Italian and other European dishes.

“As a country wanting to attract tourists to our borders, we have to be able to offer a variety of cuisines appealing to a variety of palates,” he said.

Column: So much to do in Cape Town – the non-beach options  -  Sarah Robertson
Insurance good and proper? COVID-19 and a tattered industry’s end game  -  Don Scott
What does a post-COVID-19 future hold for the MICE industry?  -  Tim Cordon
Specials and discounts – responding to low demand  -  Onne Vegter
Repair team dynamics with behavioural profiling  -  Teresa Richardson
END_OF_DOCUMENT_TOKEN_TO_BE_REPLACED