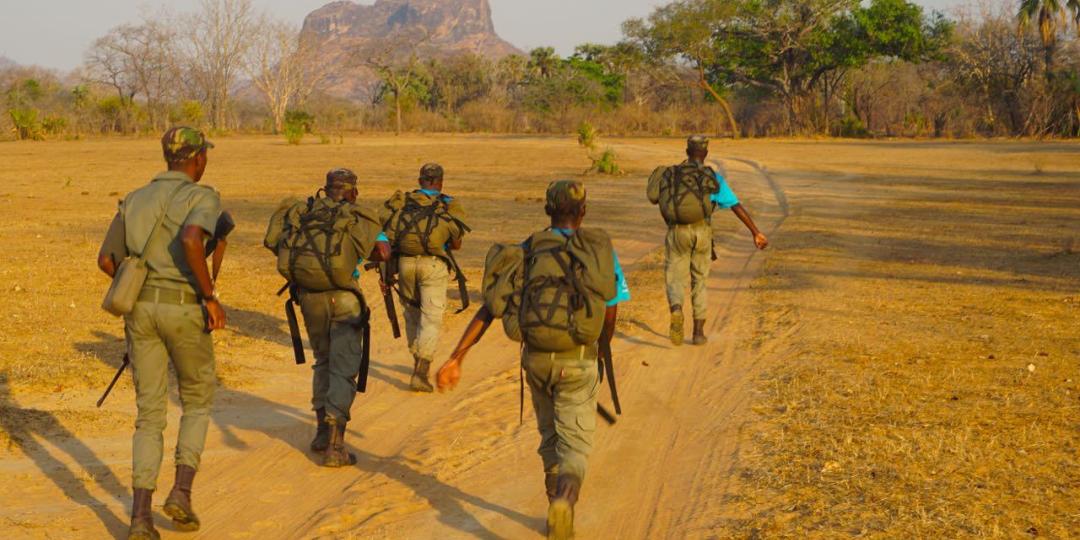 Rangers from the Niassa Carnivore Project in Mozambique.
Comments | 0

South African wildlife rangers will soon be joining their counterparts from across Africa in a global drive to unite rangers, influencers and celebrities to raise funds lost through the COVID-19 pandemic that has sparked a rise in poaching and loss of animals across the continent.

The global fundraising effort is a response to a continent-wide wildlife crisis that has been caused by the COVID-19 pandemic reducing tourism volumes by about 70% and virtually eliminating the flow of essential funding from tourism into anti-poaching activities across the continent.

In 2018, the global wildlife tourism economy generated over US$100bn and provided nine million jobs, worldwide. But COVID-19 has resulted in an almost complete end to cross-border travel, severely affecting countries dependent on tourism revenue as a significant part of their GDP.

The International Ranger Federation highlighted in a recent report that since the pandemic, more than 50% of rangers reported that they had experienced budget cuts and over 30% reported that colleagues had been laid off.

The current pressures on Africa’s protected areas threaten to compromise decades of development and conservation success.

Africa’s rangers are stretched to capacity and continue to see drastic cuts in resources and an increase in subsistence poaching due to the devastating economic impact of COVID-19.

A new survey – conducted by conservation groups Tusk and Natural State in conjunction with 60 field conservation organisations across 19 African countries – found that wildlife rangers saw no relief in sight, as the COVID-19 pandemic continued to impact Africa’s communities and wildlife.

Ultimately, this reduction in capacity to fight poaching could result in an increasing threat to wildlife as international borders reopen, opening the possibility of cross-border poaching incursions and illicit trade.

Sergeant Nyaradzo Hoto of the International Anti-Poaching Foundation, pointed out:  “COVID-19 has presented unique challenges to our programmes. The pandemic has significantly impacted, and continues to impact, our anti-poaching operations. There has been an alarming spike in the rate of ivory-related arrests made by our team over the last year.

“The poachers will not rest, despite the pandemic, so it is up to us to maintain operations. This is proving a challenge, but one we’re resolving well as a team. We stand strong in our commitment to patrol the vast wilderness areas we are entrusted with and protect those that can’t fend for themselves against poachers.”

Local rangers will join 150 teams from other 20 African countries in a series of events that began with the launch of World Ranger Day on July 31. From Ranger Day, the South Africans will then take part in a series of mental and physical challenges that will culminate in the running of a half-marathon (21km) race, the finale of the events on September 18.

The campaign is organised by the Tusk Lion Trail, and Natural State in conjunction with the leading ranger associations. Tusk’s mission is to amplify the impact of progressive conservation initiatives across Africa. The charity has earned a reputation for providing a highly efficient solution for funding wildlife conservation programmes.

The campaign will use the power of ranger voices, influencers, and celebrities to mobilise public support for Africa’s rangers by donating to the Ranger Fund or by taking part in the WRC events, wherever they may be in the world.

The 21km event will be run simultaneously in all 20 participating countries on the same day, and will see various South African conservation organisations taking part, such as the Southern African Wildlife College, Project Rhino, Transfrontier Africa, Wildlands Conservation Trust and the Wildlife ACT Fund Trust.

WRC aims to raise about US$5 million by the time of the Half Marathon (21km) race, in September.

The first Wildlife Ranger Challenge launched in 2020, raised US$10m which was used to support more than 9 000 rangers working to protect over four million square kilometres of conservation areas across Africa by providing salaries, equipment and helping to meet operating costs.