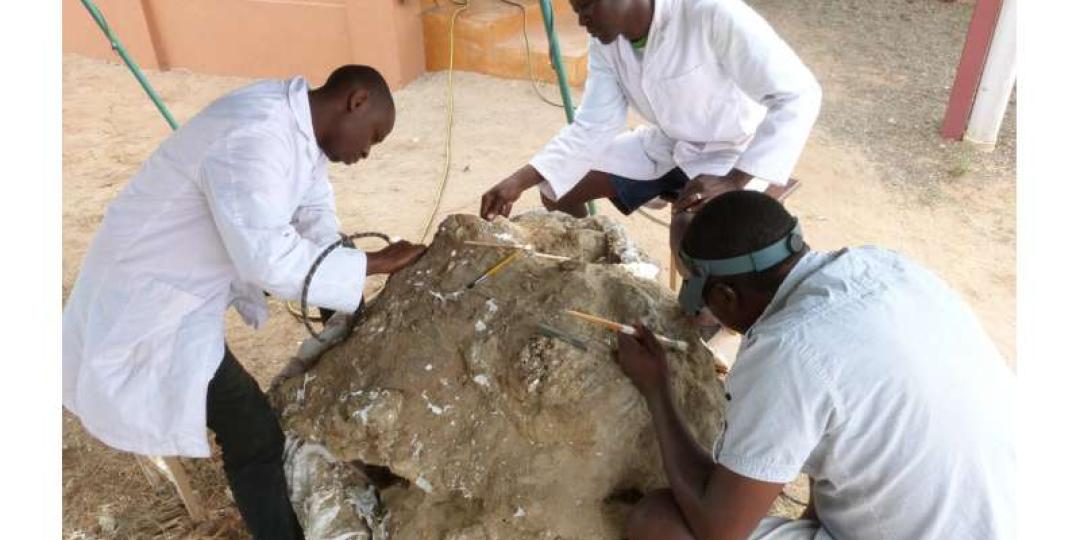 Preparators from the National Museums of Kenya at the Ileret research facility of the Turkana Basin Institute working on the cranium. From left to right: Cliff Onyango, Robert Moru and Christopher Kiarie. Source: Steve Jabo, Smithsonian Institution
Comments | 0

A remarkably well-preserved fossil elephant cranium from Kenya is helping scientists understand how its species became the dominant elephant in eastern Africa several million years ago.

Dated around 4.5 million years old and recovered from a site on the northeast side of Lake Turkana, it is the only well-preserved elephant cranium — the portion of the skull that encloses the brain — from that time.

It is about 85% intact, offering much anatomical detail scientists have not yet had access to, according to University of Michigan palaeontologist William Sanders.

Known by its museum number, KNM-ER 63642, the roughly 2-ton cranium belonged to a massive adult male of the species Loxodonta adaurora, an extinct cousin of modern African elephants but not a direct ancestor.

The cranium is striking because it is raised and compressed from front to back, suggesting a unique alignment of chewing muscles well-suited for efficiently shearing grass. The molars are also higher-crowned with thicker coatings of cementum than other early elephants, making the teeth more resistant to the wear commonly found in animals that feed on grasses close to the ground.

Recovery, conservation, dating, description and identification of the elephant cranium involved collaboration between researchers and technicians from the Turkana Basin Institute, National Museums of Kenya, University of Michigan, Rutgers University, Smithsonian Institution and University of Utah.

The adult male is estimated to have been 30 to 34 years old at death, likely weighed about 9 tons, and stood about 3.66m at the shoulder – bigger than average male elephants of modern times.

"In my opinion, this elephant skull is by far the most impressive specimen that we have in the Kenyan paleontological collection from Lake Turkana, both in its completeness and in its size," says palaeontologist and study co-author Louise Leakey of the Koobi Fora Research Project. "When the teeth were seen on the surface, we had no idea that a complete cranium would be uncovered, and the excavation and recovery operation was both challenging and exciting."