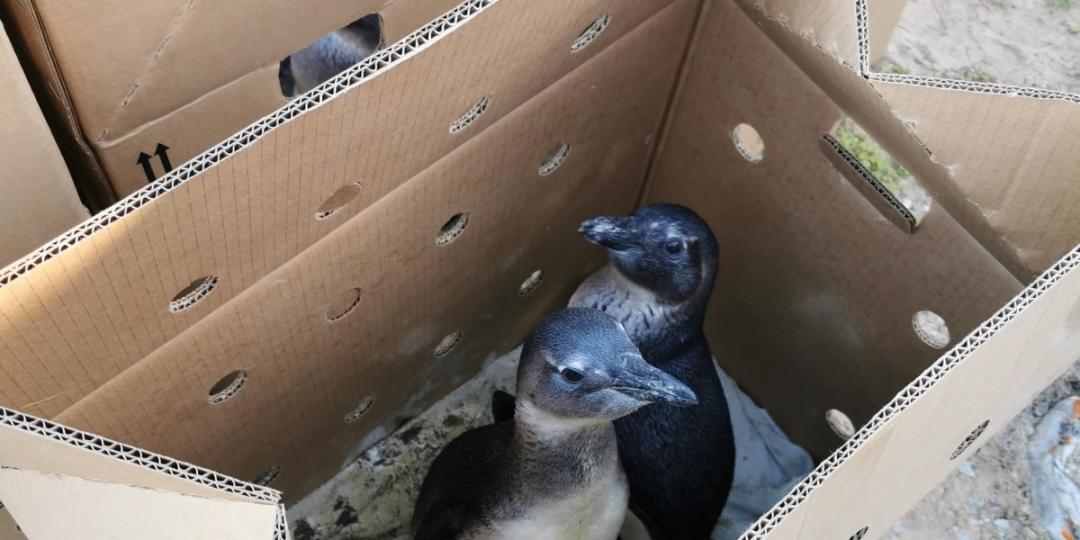 The release of 30 juvenile African penguins into the wild this week represented a big step forward to re-establish a penguin colony on the south coast of South Africa.

BirdLife South Africa, CapeNature and the Southern African Foundation for the Conservation of Coastal Birds (SANCCOB) have partnered to help this endangered species.

The African penguin population is decreasing rapidly, primarily due to a lack of food. A shift in fish stocks away from historic feeding grounds on the west coast, as well as competition with the fishing industry, have meant that the birds are struggling to find food.

Penguins have been unable to follow the changed prey distribution because of a lack of safe breeding sites along the southern Cape coast. A small colony was established at the De Hoop Nature Reserve in 2003 but predation by caracal caused the birds to abandon the colony a few years later.

To entice penguins to re-colonise the area naturally, life-like penguin decoys and penguin calls being broadcast by loudspeakers help create the impression that penguins are breeding there.

After waiting two years to test whether natural colonisation would happen, the BirdLife South Africa and CapeNature approached SANCCOB to assist with the next step, which is to release penguins at the colony. The first release took place on June 11.

“This release, which will hopefully be the first of many, is the culmination of many years of work, so I’m immensely excited to see it finally happening!” says Christina Hagen, the Pamela Isdell Fellow of Penguin Conservation at BirdLife South Africa. “Although there are more years of hard work ahead of us, it is an important step to take now, as every year we wait, we lose more and more penguins.”

The released penguins were hand-reared at SANCCOB. Most hatched from abandoned eggs rescued at the Stony Point penguin colony and incubated at the organisation’s Table View facility.

CapeNature CEO, Dr Razeena Omar, says: “CapeNature is proud to be part of this innovative project on one of our flagship protected areas, De Hoop Nature Reserve. It is critical that we reverse the decline of the endangered African penguin, and the release of the rehabilitated fledglings is an important next step in achieving the goal of establishing a colony.”

In addition to the released birds being individually marked with Passive Integrated Transponders for post-release monitoring, two penguins will be fitted with GPS trackers to monitor their movements immediately after release.

“We received an unusually large number of African penguin eggs earlier this year and it was a tall task to hand-rear so many chicks at once. Events like this one indicate the trouble that African penguins are in when extreme weather conditions and lack of food cause adult birds to abandon their nests to save themselves,” says Dr David Roberts, Clinical Veterinarian at SANCCOB.

Let’s rethink tourism enterprise development  -  Septi Bukula
The indoors/outdoors experience can provide a sense of safety for guests  -  Jeremy Clayton
The needless pause into the brave new world of travel  -  Gavin Tollman
A case for rethinking and rebuilding tourism  -  Sindile Xulu
Why is South Africa red listed by the UK?  -  Onne Vegter
END_OF_DOCUMENT_TOKEN_TO_BE_REPLACED