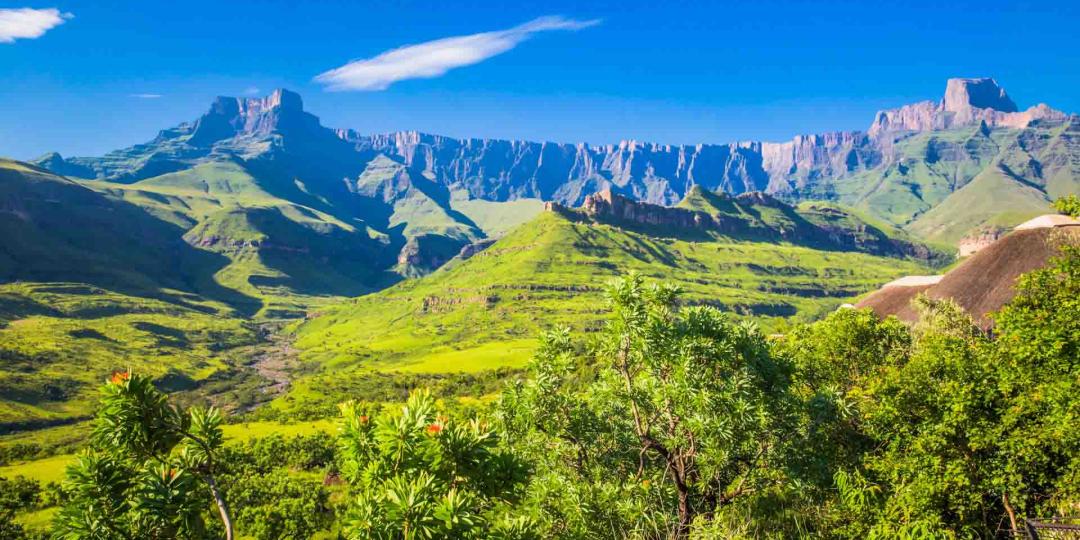 The Drakensberg is South Africa’s dominant and highest mountain range, spread across the KwaZulu Natal (KZN) and Mpumalanga provinces.

The southern Drakensberg, nearest to destination hubs like Underberg and Matatiele in the far south, is a couple of hours’ drive from Durban and the holiday resorts of the south KZN coast.

The central and northern ‘Berg’ (as it is known locally) areas, including iconic destinations like Giant’s Castle, Mont-aux-Sources and Royal Natal National Park, is equidistant between Johannesburg and Durban and most easily accessible via the N3 motorway between the two cities.

The eastern Drakensberg is the dramatic escarpment visible from many of the Greater Kruger Park game reserves, the Manyeleti, northern Sabi Sands and Timbavati amongst them.

What makes it a tourist destination?

The Drakensberg is the highest mountain range in the country, 3 482 metres above sea level at its highest peak. The Drakensberg – the name means Dragon Mountains in Afrikaans, or uKhahlamba in Zulu, which means ‘barrier of spears’ – includes the awe-inspiring Amphitheatre Valley of the northern Drakensberg.

The northern and most visited section of the Drakensberg lies on Route 74, the more scenic alternative to the N3 Toll Road. It stretches from the farming village of Bergville in the south, the gateway to the northern Berg from Durban side, to Oliviershoek Pass in the north, the gateway for visitors from Johannesburg, roughly 300km north along the N3.

Better-known Berg peaks to photograph and summit include Giant’s Castle, Cathedral and Cathkin Peaks and Mont-Aux-Sources. There is a range of tourist accommodation in the area, ranging from rustic to boutique country hotels.

The eastern Drakensberg in Mpumalanga is the part most familiar to foreign visitors. This part of the escarpment is best known for the Panorama Route which leads travellers by road from the Johannesburg region to God’s Window, Bourke’s Luck Potholes and the Blyde River Canyon and down into the lowveld to the Greater Kruger Park and the multitude of surrounding nature and game reserves.

What is unique about the destination?

Much of the 243 000-hectare Drakensberg is incorporated into the Ukhahlamba-Drakensberg Park World Heritage Site, which straddles the landlocked mountain Kingdom of Lesotho, a former British Protectorate.

The Berg is an area of varying landscapes and intense scenic beauty, including trout fishing destinations and over 600 examples of San rock paintings in caves around the park, while also being close to some epic battles from the Anglo-Boer War (1899-1902).

Its proximity to the KZN Midlands, with its crafter breweries and art route, is an added attraction.

The eastern Drakensberg is characterised by features around the Blyde River Canyon, the second longest canyon in the world after the Grand Canyon. The unique visitor attractions of God’s Window and Bourke’s Luck Potholes are found along the Panorama Route.

What are the top activities for tourists?

Photography enthusiasts, hikers and adventurers are drawn by the Drakensberg’s attractions, which include snow-capped peaks, hiking trails, rivers, waterfalls and caves.

The Southern Drakensberg is around 250-300km from Durban and includes the infamous Sani Pass, considered to be the ‘mother of all mountain passes in South Africa’.

Some of the best San rock art is found in the Drakensberg, with the landmark Battle Cave on one of the Giant’s Castle trails as an example.

For adventurers there is an aerial cable trail, canopy tour, zip line or gorge swing and paragliding, making for compelling experiences. Some challenging rock-climbing opportunities, and white-water rafting and tubing on the Tugela and Injasuti rivers are also winners.

Activities in the eastern Transvaal Drakensberg range from adventure activities up in the mountains and in the foothills, zip-lining, hiking, mountain-biking and gorge swings amongst them, to the more sedate game drives and photography in the lowveld game reserves below.

The Drakensberg experiences summer rainfall, and has dry winters. However, cold fronts lasting several days at a time can roll up from the Cape at any time of year. As with any mountain environment, the Drakensberg can attract weather extremes and, like Table Mountain in Cape Town, change can happen very quickly. This is important for hikers and climbers to bear in mind as it can affect visibility.

The summer months, from October to March, are usually warm to hot and pleasant, with lush vegetation, especially after rain. November is probably the best time for those who want to photograph flowers and bulbs.

In winter, snow on the Drakensberg is not uncommon on the peaks and Amphitheatre, and occasionally covering the low-lying areas. For many it’s the best time to hike; generally a dry period and temperate, with early mornings and late afternoons being ‘brisk’.

The best time to visit the eastern Transvaal/Mpumalanga Drakensberg escarpment is often April and September. It is never quite as cold as the KZN Drakensberg.

Dress in layers, make contact directly with the national parks you intend to visit to confirm gate opening and closing times, especially in winter and after heavy rain to check road access. There is no malaria in the area nor is there a need for any other prophylactics. A sunhat, sturdy walking shoes and suntan lotion as well as mosquito repellents are a must in summer.