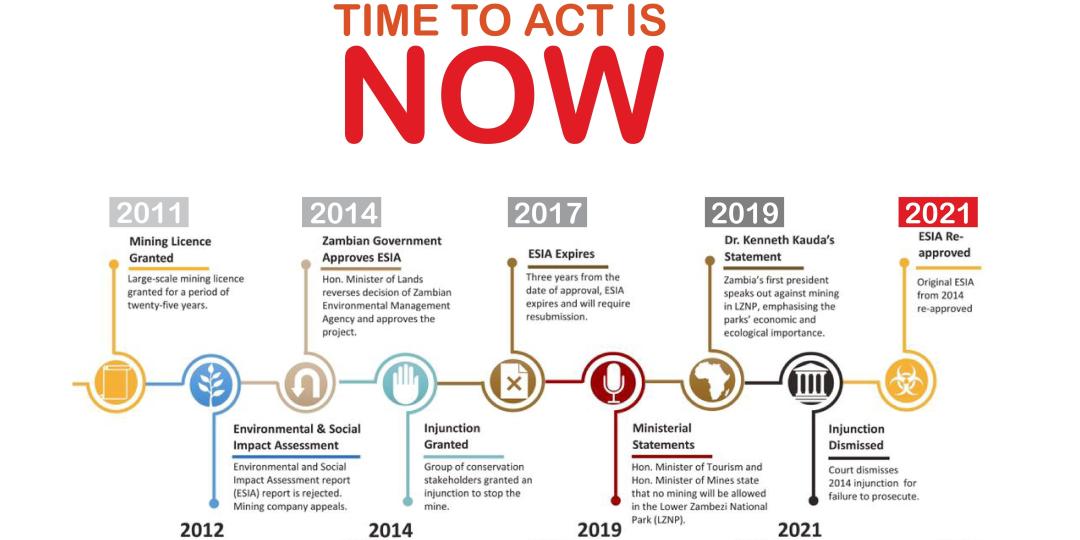 A coalition of tourism, environmental, and other non-governmental organisations (NGOs) and stakeholders has called on the public to urgently help halt a controversial open-pit copper mine project in the Lower Zambezi National Park (LZNP) that, it says, will threaten the Park’s tourism establishments and the wider tourism industry in the region.

The NGO coalition says the Kangaluwi mine, owned by Mwembeshi Resources Ltd, will have a potentially devastating impact not only on tourism, but the people, water, land and environment in the Southern African region. The campaign, #Save Zambezi, Safe Zambezi, has been launched to raise awareness. A petition can be signed on change.org https://www.change.org/SaveZambeziSafeZambezi and those interested can join the Facebook movement https://www.facebook.com/savezambezi,” it says.

Eco-tourism in the area depends heavily on the renewable wildlife and habitat resources and contributes significantly to the local and national economies around the LZNP. Tourism establishments in the Park and surrounding game management areas employ more than 1 000 local people, generating a local wage bill of R57,5m (€3.4m) annually that indirectly supports thousands more people at a local community level. The coalition says it is estimated that about 50% of the LZNP will be lost with the development of the mine and the mine will have a direct negative impact on not only the Park, but also on Mana Pools National Park in Zimbabwe, which is also an important tourist destination.

“The Zambezi basin is the most significant shared resource that contributes to economic, environmental and social development of Southern Africa. Sustainable management of this resource is crucial in securing the futures of over 250 million people in the region that depend on it, and for tourism in the region” it says.

The late former president of Zambia, Dr Kenneth Kaunda, said the mine posed the biggest threat in history to the wildlife and pristine wilderness that has survived so many centuries of challenges.

“We are appealing to the Government of the Republic of Zambia to reconsider and revoke the permission to mine the Lower Zambezi, which could jeopardise a renewable, sustainable asset of local, national and international importance,” says the Coalition.