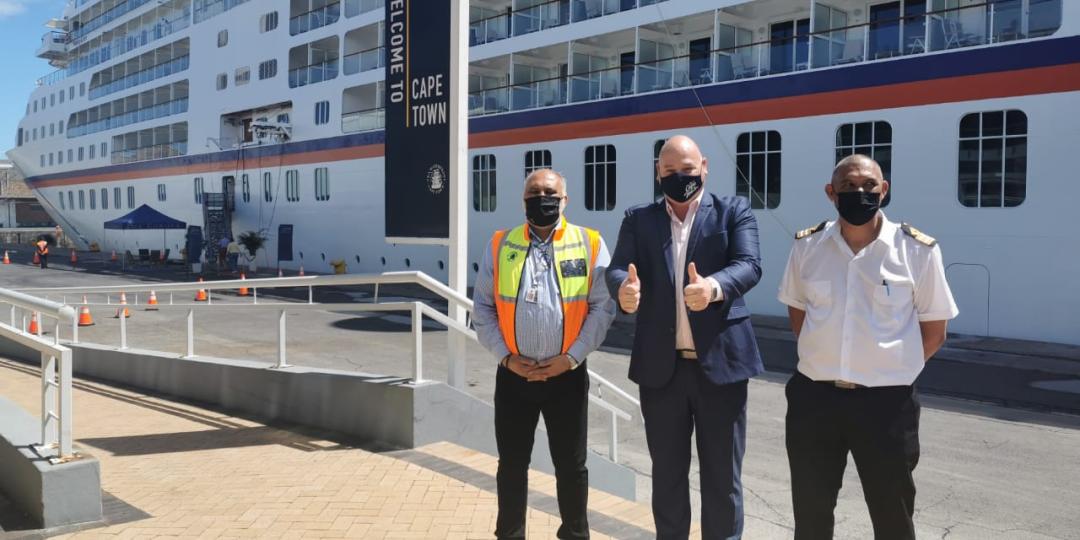 While 36 cruise ships – scheduled to dock in Cape Town over the next six months – have cancelled, the Mother City’s cruise market is still expected to “make waves in a big way”, according to Mayoral Committee Member for Economic Opportunities and Tourism in Cape Town, James Vos.

Vos was at the Port of Cape Town yesterday to welcome the TUI group’s MS Europa cruise ship. En-route from Namibia, the 230 passengers heard they would need to disembark in Cape Town, get tested for COVID-19 and fly back home.

The passenger liner, owned by the TUI group, was the first international cruise ship to dock in Cape Town since March 2020, when the national government banned cruise ships from all ports as a control measure against the spread of COVID-19.

“During my visit to monitor the entry I was informed that, due to the latest travel bans unfairly slapped on South Africa, several of the 36 other scheduled ships for the coming period until May, have cancelled,” said Vos.

He remained optimistic though, noting that, with the launch of Cruise Cape Town – a partnership between the City of Cape Town and several other entities located in Wesgro –  stakeholders had focused on boosting the Mother City’s destination profile in this market, which has a projected value of R220 billion (€12.31bn) over the next five years.

He cautioned, however, that ongoing travel bans – which have proven ineffective and unnecessary – will put this tourism revenue opportunity at risk.

“With this kind of potential for huge economic benefits, both in terms of passenger and crew spend, and for maintenance of cruise ships, it is time the world reopens travel to South Africa and lets Cape Town’ set sail,” said Vos.

It is not just the cruising sector that has been affected by the travel bans, with the Western Cape’s Department of Economic Development and Tourism’s ongoing survey showing (at 14h00 on November 30) that:

The survey has, to date, received a total of 635 responses, predominantly located in the Garden Route, Cape Town and Cape Winelands.

Premier of the Western Cape, Alan Winde, said his government was focused on reversing these travel bans.

“We are lobbying to have the travel bans removed. The World Health Organization has been clear that this is not the correct response by the international community. The Quarterly Labour Force Survey data released yesterday (Tuesday, November 30) demonstrates clearly just how badly we need the Tourism and Hospitality sector to create jobs over this peak season.”

Winde said he had engaged with Consuls General from SA’s partner countries in Africa last night, noting that all had agreed that the measures against travelling to the southern African region be lifted and that research be conducted to guide a harmonised response to the pandemic.

“Today (Wednesday, December 1), I will further be engaging with the SA Chamber of Commerce UK, where I will again state the devastating impact of these bans and the need to reopen our borders to one another.”

Golf tourism – where to from here?  -  John Cokayne
How tourism SMEs can increase market share and profitability  -  Tshepo Matlou
Risk, response, and the power of preparation  -  Andre du Toit
Crossing the finish line – how to combat year-end blues  -  Kevin Burley
How the pandemic accelerated digital transformation in the airline industry  -  Anand Yedery
END_OF_DOCUMENT_TOKEN_TO_BE_REPLACED