The Berg Estuary officially launched as a Ramsar site

The Berg Estuary officially launched as a Ramsar site 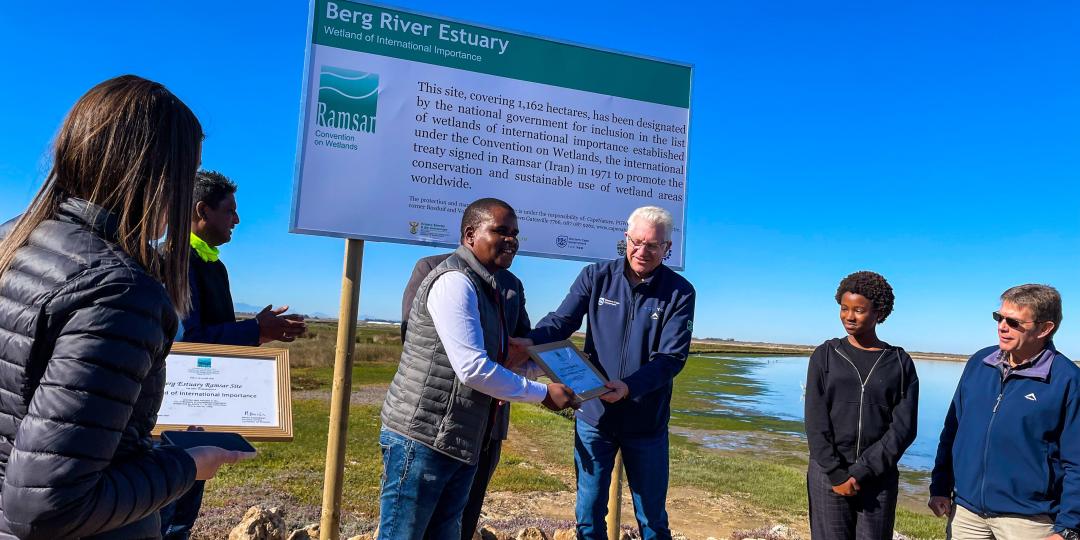 The unveiling of the Ramsar plaque.
Comments | 0

The Western Cape Government and CapeNature celebrated the launch of the Berg Estuary as a Ramsar site last week – ahead of World Environment Day on Sunday, June 5 – with the unveiling of an official Ramsar signboard at the start of the estuary.

Hosted by the United Nations Environment Programme, World Environment Day provides the largest platform for environmental outreach and awareness worldwide. This year’s theme, #OnlyOneEarth, champions global transformative environmental change and the Berg Estuary’s Ramsar status means that the sensitive and dynamic ecosystem will be protected and conserved for generations to come.

CEO of CapeNature, Dr Razeena Omar,  said: “The Berg Estuary, which was declared under the Convention on Wetlands of International Importance earlier this year, forms one of only four estuaries on the West Coast of Southern Africa. It spans across 1 162ha and contributes to approximately 60% of the estuarine habitat on the West Coast. It is truly one of a kind and an incredible biological and economical asset to the Western Cape.”

About 127 species of waterbird have been recorded at the estuary since 1975, some of which are globally threatened, such as the Cape cormorant, or regionally threatened such as the Caspian tern. The site is also important for fisheries, with communities of fish, such as white steenbras and white stumpnose, partially or fully dependent on it for breeding.

“Estuaries like the Berg provide a number of goods and services such as tourism, salt production and fishing, to name a few. These alone are worth over R380m (€23m) to the local economy per year and so its conservation is paramount not only to the local ‘Weskus’ community but also the Province’s economy,” said Premier of the Western Cape, Alan Winde.